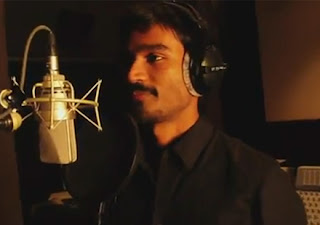 1. Kolaveri Di : No need of any explanation. Funky Tamil-English lyrics mixed with Dhanush's sombre vocals with a foot tapping tune make it a grt listen. No wonder it has crossed boundaries and has become an international phenomenon. Grt!

4. Come On Girls - The Celebration of Love : By Anirudh, Nadisha Thomas, Maalavika Manoj. Another funny song in the domain of Kaolaveri. Lyrics are funny describing the entry of wife into life.. Vocal by Anirudh is amazing, especially in the middle portions when the sound changes, couldn't help saying "wat a change over mama..!" :D

5. Nee Paartha Vizhigal - The Touch of Love : By Swetha Mohan nd Vijay Yesudas. Guitar strings make a perfect start. Vijay nd Swetha both are mesmerizing in this soft romantic number. Never gets out of control maintaining the feel. Grt listen.

6. Po Nee Po - The Pain of Love : By Mohit Chauhan. This is another highlight song. Mohit's sound easily captures the emotion of the lyrics and reproduce the best. A song instantly likable. A perfect blend of good tune, music nd singing. Fabulous!!

7. Po Nee Po REMIX - The Scream of Love : By Sathya Prakash nd Harish Swaminathan. Fast paced but without losing the essence of the original. Grt attempt.

8. A Life Full of Love - Theme Music : Haven't heard such a superb combination of Violin nd Keyboard. A track that bring back memories. Perfect!

9. The Rhythm of Love - Theme Music : Naveen Iyer. This uses Drums nd Flute effectively to create a pleasent feel. Short though. Good one.

10. Theme of 3 : By Mandolin Seenu, Aathan. Keyboard and haunting vocals. Theme of 3 is captivating.

3 lives up more than the expectations. Anirudh has proved that Kolaveri was no fluke by creating an album which flourishes both in creativity and entertainment value. High point of the album is the controlled orchestration which is not too loud nd not too low but maintains goos balance.
These are for the classes and the masses. Go for it.!!
4/5
Posted by Gokul at 8:21 PM 1 comment: 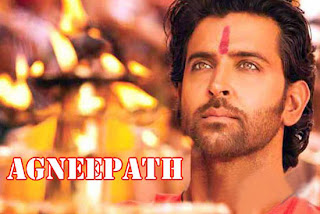 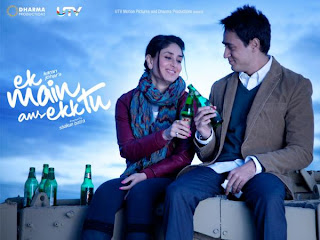 2011 had been a pretty eventful year for Bollywood with a good number of films crossing the 100 crore mark. We saw Salman Khan fixing his top spot with films like Bodyguard, Ready etc..while SRK experimenting with films lyk Ra.One and Don2. A year in which we saw record being broken and re-written.

Well, my concentration is only in music. In dat case too, 2011 saw a good number of chartbusters. People to danced to the rythem of Chammak Challo nd Dhinka Chika while enjoyed the breezy tunes of Teri Meri and Haal-e-dil. Western artists like Akon and Ludacris featured in various tracks which was also the sign of global recognition of Bollywood music.

Amit Trivedi gave a killer opening to 2011 with track ‘Dilli..” from ‘No one Killed Jessica’. The song was a huge hit and saw discos dancng to it. January also saw a musical delight with ‘Dil toh Bachha hai Ji’ with Pritam composing a decent album nd songs like ‘Abhi Kuchh Dinon se’ becoming hits.

March was a disappointment but April bettered the situation with ‘FALTU’, ‘Dum maaro Dum’, ‘Shor in the City’, ‘Thank You’ etc.. ‘Char Baj Gayi’, ‘Dum Maaro Dum’, ‘Te Amo’, and ‘Saibo wer hits of the month.

June was the year to produce the first chartbuster in the form of ‘Ready’. Songs like ‘Character Dheela’ and ‘Dhinka Chika’ were sort of viral hits nd remained in the charts for weeks. The month also saw good albums like ‘Shaitan’ and ‘Always Kabhi Kabhi’.

July was the month of hilarious experimentation with the arrival of ‘Delhi Belli’ nd song ‘Bhaag DK Bose’ becoming a rage. All the songs of the movie were hits and ‘DK Bose’ was a chartbuster.! The good scene continued with the arrival of ‘Murder 2’ with another super hit ‘Haal-e-Dil’ and other good tracks like ‘Phir Mohobbat’ and ‘Aye Khuda’. ‘Zindagi naa Milegi Dobara’ arrived with some pretty cool tracks like ‘Ik Junoon’, ‘Senorita’ etc.. ‘Singham’ also had a couple of good tracks like ‘Saathiya’ nd ‘Maula’.

September came up with ‘Mere Brother Ki Dulhan’ which was a musical treat with almost all songs becoming hits. Songs like ‘Dhunki’, ‘Isq Risk’, nd ‘Mere Brother’ were major hits. Next we saw Pritam at his best with ‘Mausam’. “Rabba’, ‘Ik Tuhi’, nd ‘Saj Dhaj Ke’ becoming huge hits proved his worth. ‘Force’ had a couple of good songs like ‘Khaabon Khaabon’ and ‘Chahoon bhi’.

In October, ‘Love Breakups Zindagi’ produced a good track ‘Rab Raakha’. The next good album was the hyped ‘Ra.One’ with a good deal of good songs. Akon’s ‘Chammak Challo’ was the pick of the lot, which was hit even before the release due to internet leakage. Songs like ‘Criminal’ nd ‘Bhare Naina’ were also great songs. ‘Damadamm’ was next with a hit song ‘Umrao Jaan’.

Compiling both the lists,

This popular song from Salman Khan starrer movie Ready was a huge hit among the youth in 2011. Music director Devi Sree Prasad redid his Telugu hit ‘Ringa Ringa’ into Dhinka Chika which was an instant Chartbuster among the masses. Salman Khan and Asin featured in the video.

This song from movie Dum Maaro dum was really a change of genere for Sunidhi Chauhan from the ‘Shiela’ mode. Sweet and lovable number from the word go! Ash King supported Sunidhi beautifully. Filmed on Kunal Kapoor and Bipasha Basu.

This is the killer song from film Mere Brother ki Dulhan, rendered beautifully by Neha Bhasin. Surely, this girl is a promise to the future. Real rocking song which created airwaves among the youth.!! Filmed on Imran Khan and Katrina Kaif.

One of the best song from Rockstar, A R Rahman really comes into top gear with the album, and Mohit Chauhan’s smooth vocals turns the track into the gem of a song! Filmed on Ranbir Kapoor and Nargis Fakhri

Rahat Fateh Ali Khan is in the helm of affairs with this sweet romantic track which yet again proves the talent of the artist. One of the best songs from Mausam, this proved to be a non mover in the charts. Filmed on Shahid Kapoor and Sonam Kapoor.

This killer rock track from Delhi Belly was one of the greatest hits of 2011. Composed and sung by Ram Sampath, the song created controversy because of its double-meaning lyrics. Neverthless, the song was a big hit with the Indian youth. Filmed on Imran Khan

Harshit Saxena made his Bollywood debut with a bang!! This Melodious and romantic track from Murder 2 was one of the USP of the film. A perfect song tailor made for Emraan Hashmi. It captured the emotions beautifully and proved to be an instant hit.!

Datz it. Sadda Haq..Eithe Raqq!! The youth anthem of 2011! From the very first day of Rockstar promotions the song created tremendous hype and after the song released, riding on the tremendous positive response, the song shot up the charts in no time. A R Rahman’s music and Mohit Cahuhan’s energetic vocals mixed with western artist Orianthi’s superb guitar work produced a song datz to be remembered for long.! Filmed on Ranbir Kapoor

The best melody of 2011, crossed 2 crore views in 4 months and topped the BBC Asian singles download chart for 20 weeks in a row! One of the most downloaded song of 2011, this Himesh Reshammiya musical is considerd as the comeback of the composer into mainstream music composing. The song was a USP of Salman starrer Bodyguard. Sung by Rahat Fateh Ali Khan and Shreya Ghoshal, the song captures the nostalgia and emotion of lost loves. Filmed on Salman Khan and Kareena Kapoor.

Song of The Year

Everything proved ryt and after the album released, the song received tremendous positive response and topped the charts. Chammak Challo was named the most downloaded song and video of the year in a survey by wireless telephony major Airtel Of the total downloads of the song in India, 41.13% were by people in south India, followed by 30%, 16.75% and 11.85% in the west, east and north. The track was also rated as the best item number of 2011 in a Mid Day poll. Filed on SRK and Kareena Kapoor.

Namaste, myself Goku!, Indicritic, a music lover and yearning-to-be musician from God's own country Kerala. The intention behind this blog is to pen down my thoughts about the music I hear, song by song, straight to the point, short and honest music reviews.
The views in my blog are my own and my own only, and all criticisms are welcome.

I sometimes give albums a rating from 1 to 5 out of  Five. They are not some random figures, rather it is based on some criteria I myself have formulated.

1/5 : AVOIDABLE. An album with absolutely no innovation, no repeat value, and poor execution.All songs are a total fail.

1.5/5 : POOR. Album in which some songs show some sparks, but album totally fails due to lack of creativity or the reluctance of songs to go in the mood of the setup.

2/5 : BELOW AVERAGE. One or two songs are hearable but forgetful. Majority of songs fail. Album as a whole is imperfect.

2.5/5 : AVERAGE. All songs are somewhat good, some may even show promise, some may even prove to be hits, but album as a whole is down in innovations. An album that won't play in our players for long.

3/5 : GOOD. All songs are good. There may be one or two promising songs, and rest average songs. Still a decent hear that won't leave you disappointed.

3.5/5 : VERY GOOD. All songs are good with right amount of feel in each one. One of the better works of the music director, the album has repeat value. May contain more than one chat climber songs and rest all good songs. Album is definitely worth its price and will leave you delighted!

4/5 : EXCELLENT. One of the best works of the music director. Each and every song prove to be very good with each one different from other. Definitely a chart buster with maximum effort taken by the music director. Everything seems working in the album and it'll grow on you in time.

4.25/5 : OUTSTANDING! Each song is a gem. You can't help but listening to each one again and again. No human imperfections possibly there. The music director is in the apex of his talent. Yet one or two songs gets saturated and you may stop listening to it after some time.

4.5/5 : OUTSTANDING!! Each song is a gem. You can't help but listening to each one again and again. No human imperfections possibly there. The music director is in the apex of his talent. Classic. Period.